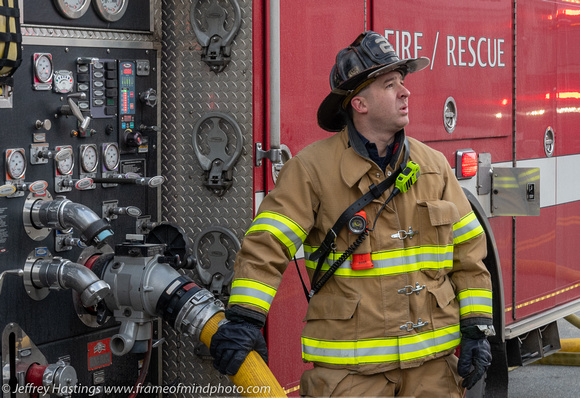 The on duty Deputy Chief arrived on scene at 39 Arlington St to find a 2 ½ story wood frame two family dwelling, with heavy smoke showing from the porch on floor #2. Upon exiting the vehicle they received a report someone may still be inside the second floor apartment. Upon arrival Engine 4’s crew advanced a hose line into the building and located a fire on the second floor porch extending into the attic area. Engine One arrived on scene and conducted a primary search of the building, which proved negative (no one inside). Ladders One and Two arrived simultaneously and conducted horizontal and vertical ventilation. Upon arrival E2 established water supply and stretched a backup line to support the initial attack. Engine 5 established RIT (firefighter safety) when they arrived on scene.

The fire continued to extend into the attic due to the construction of the building, causing conditions to deteriorate. A second alarm was transmitted to bring more resources to the scene (E3 and E6) to support the fire attack. Eventually the fire was brought under control and companies remained on scene for an extended period of time conducting overhaul and salvage work.

The cause is under investigation by the City of Nashua Fire Marshal’s office. Please contact this agency for updated information pertaining to the status of this investigation @ 603-589-3460 during business hours Monday-Friday.