Enroute it was immediately noted a column of black smoke was visible from the Lake Street Fire House and a working fire assignment was requested by the Deputy Chief. Engine 1 and Ladder 1 were dispatched to the incident.

Engine 2 and Ladder 2 quickly attacked the fire which appeared to be communicating from the 1st floor up the exterior and into the attic space. Engine 4 assisted with water supply and stretching a back-up line into the building. Engine 5 stood by for fire fighter safety. Ladder 1 arrived and assisted with placing multiple ground ladders to the building. Ladder 2 vented the roof via opening a 4’ x 4’ vent hole to assist in extinguishment. Engine 1 stood by.

A search of the building determined it to be clear of occupants. One pet dog was located and removed from the fire building alive.

NFR was assisted by Nashua Police and AMR Ambulance. AMR transported a fire officer for precaution due to probable dehydration/over-exertion. Also notified and responded to the scene were the Nashua Building Department, Eversource, and Liberty Utilities.

Two occupants and their pet dog were displaced by the fire.

Special Hazards Encountered: Difficult access for aerial ladders due to fire location being in the rear building of what was essentially 3 attached buildings with limited access from all sides but the front.

Rescues: Crews removed 1 dog from the fire unit that appeared to be ok. 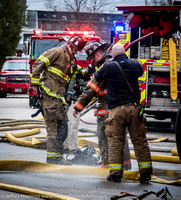 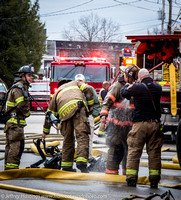 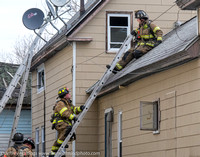 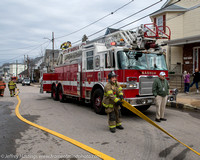 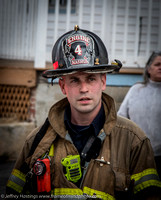 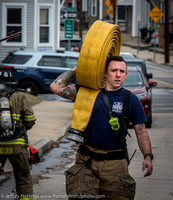