Nashua, NH - NFR responded to 68 Blossom St for a report of a building fire. On arrival they had fire up the side of the rear corner of the building. The fire quickly ignited the siding of the house and extended into the attic which became fully engulfed. The second alarm was sounded shortly after arrival.

NFR using ground ladders and two ladder trucks accessed the house, and ventilated the roof while checking for occupants.

The two family house had fire, smoke, and water damage preventing the occupants to have to be relocated with the assistance of the Red Cross.

The fire is under investigation according to Deputy Chief Kerrigan. It does appear that near the origin of the fire there had been a trash can which was consumed in the fire. 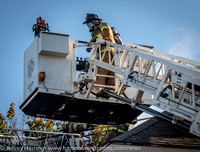 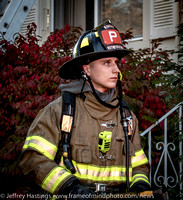