At 8:28 am NFR received a call from a passerby reporting a house fire at 47 Gilson Road. Engine 6, Engine 3, Ladder 3 the Deputy Chief, and Engine 1 responded to the scene. Enroute, Ladder 3 noted a large column of smoke visible in the distance and the “working fire assignment” was requested by the Deputy Chief summoning an additional engine and ladder company (Engine 2 and Ladder 2).

NFR Engine 6 arrived with heavy fire visible from the front left corner of the building (2 story single family cape cod type residence). Engine 6 and Engine 3 attacked the fire from the interior of the home with the assistance of Ladder 3. Ladder 3 ventilated the roof of the home as the fire was extending from the first floor into the second floor.
Searches of the building proved no occupants were present. Engine 1 provided standby for fire fighter safety. Engine 2 and Ladder 2 assisted with final extinguishment of the fire. AMR ambulance stood by as a precaution and ultimately transported one member of NFR to the medical center for a slip and fall injury to an upper extremity.

The home is uninhabitable due to fire, smoke, and water damage. Several tenants were displaced (exact number still be determined) and it was still being determined if any assistance would be required for their housing.

Deputy Chief Gerhard said rapid containment of fire extending from floor one to floor two. The weather offered challenges and were sub-zero during the incident resulting in slipping hazards.

One member of NFR injured due to slip and fall. The non-life threatening injury has resulted in loss work time. The member was treated and released from SNHMC and will require follow up evaluation/treatment.
©Jeffrey Hastings / www.frameofmindphoto.com 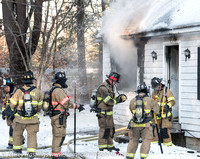 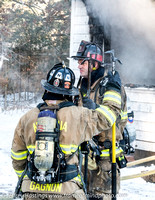 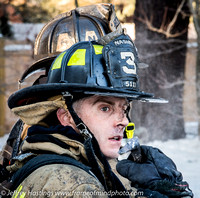 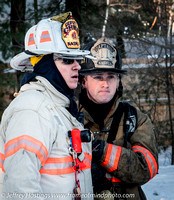 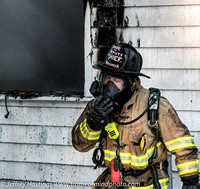