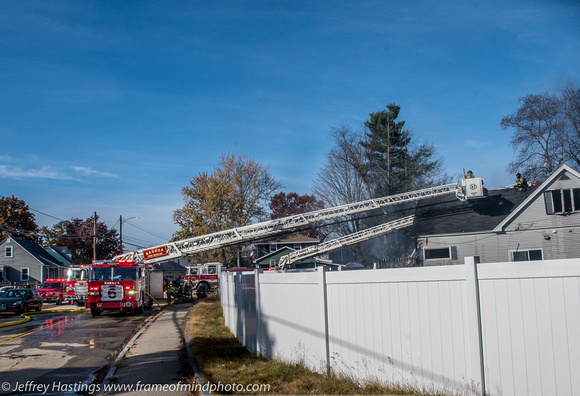 Engine 6 arrived on scene to locate heavy fire from the front of the building that had extended into the interior first and second floors of the building. A working fire assignment above the initial 1st alarm assignment was ordered bringing Ladder 2 and Engine 4 to the scene additionally.

Crews extinguished the bulk of the exterior fire and proceeded into the interior to extinguish the fire. Crews located and removed 2 dogs from the building, neither requiring immediate care (both ok). Crews worked to control the fire on the first floor while additional crews accessed and extinguished the fire on floor 2. Ladder 1’s crew ventilated the roof over the main fire area to assist in fire control. The remaining searches of the building proved the building to be clear of additional occupants. The bulk of the fire was extinguished and the incident placed under control 24 minutes after initial dispatch.

Four occupants will be displaced and housing was still being determined at the time of this press release. Nashua Fire Rescue was assisted at the scene by Nashua Police and AMR ambulance.