Nashua, NH - Nashua Fire Rescue responded to multiple calls at 6:49 am to 40 West Hollis St for a reported structure fire. On their arrival they had smoke and heavy fire showing from the second floor of a 2.5 story vacant building and were informed there were some “squatters” still in the building.
After searches were done of the building no one was located. 3 lines were stretched and in operation to attack the fire and prevent extension.
No firefighters or civilians were injured and the fire is being investigated by the Nashua Fire Marshals Office and Nashua Police.
©Jeffrey Hastings www.frameofmindphoto.com/news 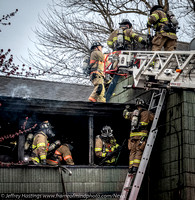