NFR was dispatched to a reported building fire discovered by a passing Nashua Police Officer. Enroute, a working fire response was ordered due to the large volume of smoke visible to the Deputy Chief upon exiting the East Hollis Street Fire Station.
On scene NFR found heavy fire in a1 ½ story approximately 30’x30’ single family home. NPD officers on scene reported an elderly occupant was inside the building and a second occupant had re-entered the fire building to attempt to rescue the elderly occupant. Multiple NPD officers were attempting to reach the trapped occupant but were forced back by fire conditions. NPD was able to locate the second occupant who re-entered the building and evacuate them safely with no injury to officers or this occupant.
NFR companies made a very aggressive interior attack to reach the occupant believed to be trapped. NFR companies reported hoarding conditions inside the residence were causing difficulty in advancing in the building and also limiting hose stream reach to extinguish fire. This greatly reduced the speed at which the fire fighters could knock down the fire and make progress to the occupant believed trapped.
A second alarm was ordered approximately 16 minutes into the incident bringing additional manpower and equipment to the scene and mutual aid to cover city stations.
A female occupant was located in the first floor and removed via a first floor window by NFR. She was initially transported to St. Joseph’s Hospital in Nashua by AMR ambulance and subsequently to Mass General with serious injuries. Several pets were also located but were determined to be deceased.
Companies continued attacking the fire for 90 minutes before the incident was declared under control. The building in likely a total loss resulting in all occupants being displaced (believed to be 3-4 occupants). The cause is under investigation by the City 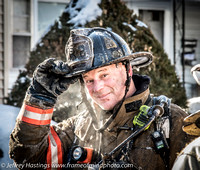 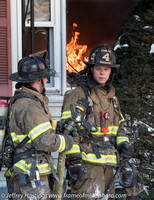 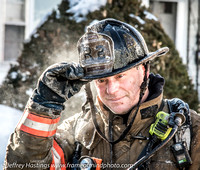 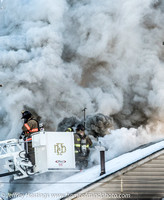 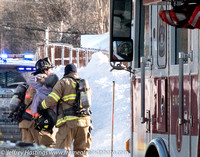