Nashua Fire Rescue received notification of a hazardous materials spill at the above listed location shortly after 7:00 am on 8/7/2017. The Deputy Chief arrived on scene at United Parcel Service (UPS) packaging sorting facility, to find the building evacuated and company representatives reporting a package spilling an unknown liquid and fuming on an elevated conveyor belt within the facility. No employees were reported experiencing medical signs or symptoms of chemical exposure upon the initial arrival of Nashua Fire Rescue.

An entry team of Nashua Fire Rescue Hazmat team members was assembled and they conducted an initial survey of the package. The Hazmat team located a properly hazardous materials marked package which was determined to contain Nitric Acid of an unknown exact quantity (approximately 5 gallons or less). The package was noted as damaged at this time, and was noted to be fuming/ leaking product down through a conveyor belt approximately ten feet in elevation onto additional machinery and the floor below.

At this time approximately ten UPS employees who had been evacuated earlier began displaying respiratory problem related signs and symptoms. A Level 1 Mass Casualty Incident was declared which brings an additional five surrounding area ambulances to the scene. Ambulances from Hudson, Merrimack, Hollis, and Lowell responded to the scene. An AMR ambulance supervisor was requested to the scene to oversee medical treatment and patient transport. Both Southern New Hampshire Medical Center (SNHMC) and St. Joseph’s Hospitals were contacted and coordinated with prior patient transport. Patients were decontaminated at the scene and four were transported to SNHMC, two to St. Josephs (six total transported). Four other persons ultimately declined further medical evaluation or transport.

After all patients had been decontaminated by Nashua Fire Rescue Hazmat team members (and transported to hospitals by local area ambulances), the team re-entered the scene, contained the remaining product, and neutralized any spilled product. UPS requested Clean Harbors to the property to coordinate proper site cleanup and disposal of any contaminated materials.

The State of New Hampshire Fire Marshal’s office was notified and advised of the situation. Nashua Police assisted in scene management and package tracking history (all found to be legitimate). The City of Nashua Emergency Management office assisted at the scene.

The incident was placed under control and the scene/property was turned back over to the UPS control at approximately 10:00 am.

Rescues: None, occupants had self-evacuated prior Nashua Fire Rescue arrival.

Investigation status: Determined to be an accidental product release. 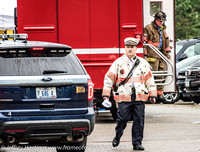 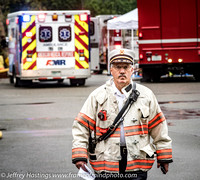 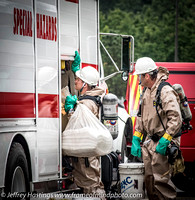