Manchester, NH - Approx 1:35 AM MFD received calls for a building fire at 137 Hazleton Ct. MFD Engine 3 and Engine 9 arrived to heavy fire on 3 sides of the building. They made entry for search mode and were immediately challenged by extreme hoarding conditions blocking entry. After making entry they located an adult male who was pulled from the fire, attempts were made to revive him on the way to the Elliot Hospital, where according to District Chief Poulin the victim perished.

MFD was also notified that the 30 year old son of the victim was potentially in the building, they made a secondary search thru the debris and could not locate him. Three vehicles were in the driveway concerning fire fighters the second person may be in the building. At this time no second person has been located, and he remains unaccounted for. MPD are making attempts to locate him.

MFD, MPD, and State of NH Fire Marshals office are investigating the fire. 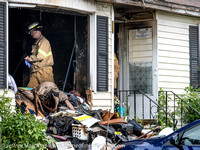