On January 11, 2020, at approximately 10:27PM, Troopers from the New Hampshire State Police Troop B Barracks along with fire and medical personnel from the Manchester Fire Department responded to the report of a motor vehicle crash involving a pedestrian on Interstate 293 North just north of Exit #7 in the city of Manchester.
Upon arrival, it was determined that the pedestrian, 54-year-old Billy Slatton of Deering, NH had been a passenger in a silver Toyota RAV4 being operated by 58-year-old Kimberly Slatton. This Toyota RAV4 experienced unknown mechanical problems and became disabled in the breakdown lane at this location. After a short period of time, in an attempt to cross the highway to get to a local gas station, Billy Slatton entered the travel portion of the roadway where he was struck by three vehicles.
The vehicles were identified as a black BMW X5 operated by 55-year-old Donald Tash Jr. of Center Barnstead, NH, a red Chevrolet Trailblazer operated by 60-year-old Kevin Cotterly of Concord, NH, and a silver Volvo XC90 operated by 34-year-old Heather Allan of Northwood, NH.
Mr. Slatton succumbed to his injuries and was pronounced deceased at the scene by the medical personnel of the Manchester Fire Department. No injuries were reported by any other individuals involved in this incident. All three drivers remained on the scene and are cooperating with the investigation.
With the assistance of the Department of Transportation personnel, I-293 North was shut down for a period of three hours while the scene was processed. During this time traffic was diverted off of Exit #7 onto Front Street.
All aspects of this crash remain under investigation and anyone who may have witnessed it is asked to contact Trooper Gillary Rosario at Gillary.[email protected] or 603-223-8787.
©Jeffrey Hastings www.frameofmindphoto.com/news 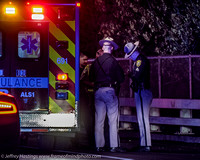