Salem, NH police had a lo-jack hit on a stolen vehicle and attempted to stop the vehicle Wednesday morning. The person driving the car refused to stop leading several law enforcement agencies on the pursuit. The pursuit went through several towns and the suspect dumped the car and fled in Chester, NH.
A foot pursuit and search involving nearly 100 officers from numerous agencies involved NHSP helicopter, several K9’s from various departments. The search went for several hours with the person being spotted near the power lines in Chester and Derry. According to NHSP Capt Christopher Vetter the suspect was spotted by a resident in the area of the power lines and Tsiento Drive in Derry. A perimeter was set up and the suspect continued to elude police. He was eventually spotted and tracked by NHSP Sgt Mark Hall with his K9 “Gator” and several Derry and NHSP officers.
The suspect attempted to run away and in to a swamp where he was up to his chest in mud and water. The officers and k9 continued to engage and eventually put him in custody when he fled the swamp. He was brought out of the wooded area behind 93 English Range Rd in Derry. Derry Fire responded to the scene and transported him to Parkland Medical to be checked out for various non life threatening injuries.
The suspect is known to Derry Police as Shane Collins, formerly of Derry. There are several warrants for him from multiple towns on previous offenses. He also had a similar incident last year when he fled police and crashed a SUV.
All photos ©Jeffrey Hastings / www.frameofmindphoto.com 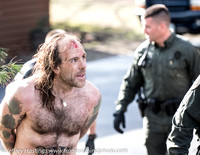 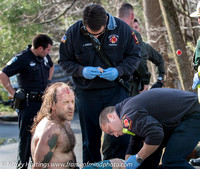