MANCHESTER, NH — On April 12, 2021 Manchester police working with New Hampshire State Police determined a suspicious device placed outside of Manchester Central High School was a "hoax device" after several streets were closed.
Police were notified by Central High staff on Monday around 12:30 p.m. of a device outside of the Central High Classical building. A staff member took a photograph and sent it to police who described the item as a device that was "taped up with wires sticking out.”
Manchester Police Chief Allen Aldenberg said to the average person, it looked like a real explosive device.
Staff who were in working in the building were evacuated, and there were no students present due to them being fully remote. Manchester police notified the public to avoid the area and shut down streets for several city blocks around the Central High campus.
State Police explosive unit was requested to the scene, and three Troopers specializing in explosive devices arrived at the scene. Manchester fire and AMR ambulance responded to the scene to stand by if needed.
Two hours after the initial call was made, the explosive technicians made the assessment that the device could possibly pose a danger. The Explosive technicians ran a detonation cable to the device and used materials to detonate the device rendering it safe. The sound of the controlled explosion could be heard for several blocks and many startled people came to the area to view what was going on.
After the device was rendered safe, Manchester detectives and state police examined the area for possible evidence. Several items were placed in evidence bags from the steps of the building, and from Beech Street. An explosive technician examined a granite wall at the base of the steps where it appeared there was debris from the item that had been detonated.
Aldenberg was asked if there were video cameras outside the school and he verified that is part of the ongoing investigation. He said that the person who placed the item faces a Class A Felony for the placement of a simulated explosive device. Aldenberg said that the investigation is underway with Manchester Police Detectives and State Police will work together on the investigation.
Aldenberg said if the school had been in session with a building full of students such a hoax would have complicated how it was handled.
“It’s disheartening,” he said.
“We have far better things to do than chasing hoax devices,” adding that they always proceed as if there is a danger.
School Superintendent Dr. John Goldhardt said the number of school district employees inside was fewer than it would have been because of the decision last week to switch to all remote learning for Monday, as many staff members received a second dose of COVID-19 vaccine over the weekend. Goldhardt expressed gratitude to the police for their quick response.
Anyone with any information regarding this incident is asked to call Manchester Police at 603-668-8711 or you can make an anonymous tip via the Manchester CrimeLine at 603-624-4040
©Jeffrey Hastings www.frameofmindphoto.com/news 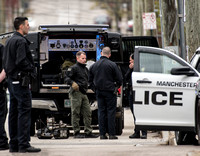