Nashua, NH - NPD received a 911 call on July 8, 2018 from a man who came home to find his roommate tied up, bloody, and deceased. NPD responded to the scene and found an adult male deceased, later identified by the NHAG as 49 year old David Smith.

The area was cordoned off, Nashua Police detectives and crime scene processing officers gathered evidence at the scene. The NH Medical Examiner came to the scene, and the body was transported to Concord, NH for an autopsy.

Nashua Police and the NH Attorney Generals Office are handling the investigation. 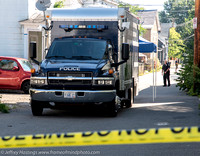