November 18, 2019 - Nashua, NH - NPD, NFR, and AMR responded to a 911 call for a male stabbed at 12 Hanover St, with reports of the suspect running from the scene. A 22-year-old male was reported to be bleeding badly, and had wounds to the head. NPD set up a perimeter, and a K-9 was brought in to track the suspect. The area was searched for a Latino or Hispanic male wearing black who was known to police. Nashua Police secured the scene, and the victim was transported to Southern, NH Medical Center. 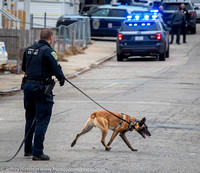