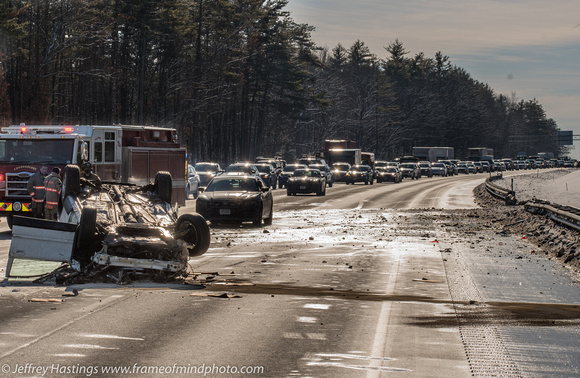 LONDONDERRY, NH — Londonderry fire, and NH State Police responded to a report of a vehicle rollover on Interstate 93 north on Wednesday.

Responding units found a vehicle rolled over on its roof at around 9:45 a.m. with a woman trapped inside the vehicle. The woman, who was seat belted, was assisted exiting the vehicle by Londonderry firefighters.

The vehicle appears to have struck the guardrail in the high-speed lane, and as a result, rolled over sliding into the travel portion of the highway. New Hampshire State Police closed three lanes of travel to allow firefighters to work on the patient.

The woman was transported to a local hospital with what appeared to be non-life-threatening injuries. The driver appeared to be seat belted, and the airbags of the Volvo Cross Country vehicle activated.

Immediately after the initial crash, another two-vehicle crash occurred just south of the initial accident. No one was injured in the second crash.

Three lanes of travel were closed on I-93 while the accident was investigated, and the vehicle was removed.