At 7:03 PM Derry Fire Alarm received multiple 911 calls of a structure fire at Rig-a-Tony’s Italian Takeout on 38 West Broadway, Derry, NH. Derry Engines 3, and 2; Londonderry Ladder 1, and Derry Car 1 were dispatched. While enroute Car 1 observed a column of smoke from a half mile away and called a working fire. Derry Engine 1, Medic 1 and Ladder 4 were able to clear prior calls and respond.

Crews made a rapid attack on the exterior fire from two sides, knocking that down and preventing the fire from spreading to an adjacent structure. Crews then entered both the basement and first floors to extinguish the fire. After extensive overhaul the fire was declared under control.

The Derry Fire Department Fire Prevention Bureau and the Derry Police Department are investigating the fire.

There was extensive damage to the rear of the structure, the basement and the attic.

Mutual Aid to the scene provided by the Londonderry, Windham and Auburn Fire Departments. Off-duty personnel were recalled to their stations while Manchester, Chester, Hudson and Salem Fire Departments provided station coverage. During the Fire recall personnel and mutual aid companies responded to three different 911 calls. 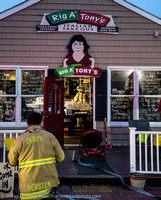