NASHUA, NH — On April 8, 2022, an apparent wrong-way elderly driver collided with vehicles in Nashua on the F.E. Everett Turnpike in the southbound lane just before 11 a.m.

Multiple calls came to 911 from people reporting a blue vehicle operating on the wrong side of the road from the Circumferential Highway in Hudson. Callers then reported the vehicle was traveling north in the southbound lane of the Everett Turnpike.

New Hampshire State Police and Nashua police responded to the highway in an attempt to stop the vehicle when a multi-vehicle collision occurred just north of Exit 4.

Nashua police arrived at the scene immediately and multiple Nashua Fire units and several AMR ambulances responded to the scene. While en route to the scene, it was reported that one driver was entrapped in a passenger car and another vehicle had rolled over.

Additional Nashua Fire apparatus was dispatched, and a trauma alert was requested for an elderly female who was entrapped inside the passenger car. Firefighters used the jaws of life, cutting tools, and spreading tools to gain access to the woman.

State Police say the victim was an 83-year-old woman from Merrimack, and she was rushed to Southern NH Medical Center with serious injuries.

Several other involved vehicles were scattered across the roadway, and medics treated the occupants of those vehicles and transported at least three people to hospitals.

New Hampshire State Police were assisted by Nashua Police in opening one lane of the roadway for traffic to pass. Traffic on the Everett Turnpike backed up for several miles, and the delay lasted for hours as the scene was investigated and cleared.

According to witnesses at the scene, the elderly woman was driving the blue Chevrolet Malibu when it began to collide with other vehicles. One struck vehicle was pushed into a Jeep, causing it to roll over the embankment.

No information on the identity of the drivers was available, 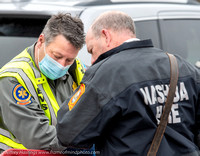 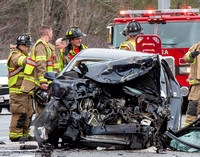 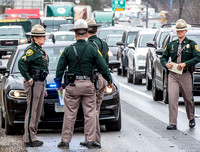 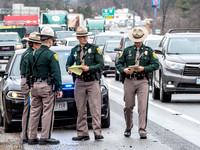