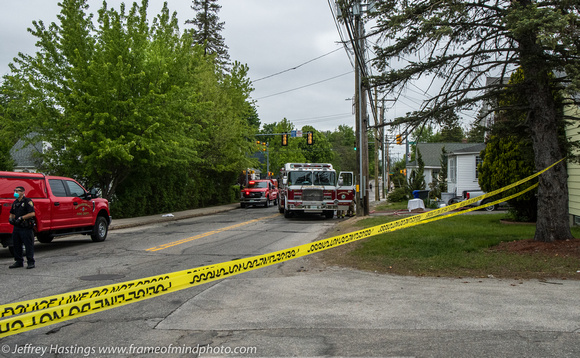 Manchester Fire and AMR responded to a reported structure fire at 466 South Beech St at 10:31 Monday.

When engine 9 the first engine arrived they discovered a kitchen fire which was extending to the porch.

Engine 9 crew members stretched a two inch line to the rear entrance and attacked the fire.
Shortly after stretching the line and entering the fire structure a 51-year-old firefighter suffered a serious medical event and was found unresponsive by other firefighters.

According to MFD Chief Dan Goonan he was quickly removed from the building in cardiac arrest. Immediate CPR and advanced lifesaving measured were administered by Manchester Fire Personnel and AMR Medics. The firefighter was rushed to the Elliot hospital.

Engine 7 stretched a backup line through the front door. The fire was brought under control at 10:59 am

Chief Goonan said the firefighter is in serious but stable condition. He is undergoing medical treatment and testing.

MFD Assistant Chief Burns said the house has approximately $75,000 damage. Fire investigators determined the fire was accidental and started due to an overloaded electrical cord.

Chief Goonan acknowledged that had the firefighter been further into the building it could have been a significantly different outcome.

Manchester Station 9 is the same fire station which lost firefighter Mason Murphy. Mason died of a medical incident after finishing a shift in March.