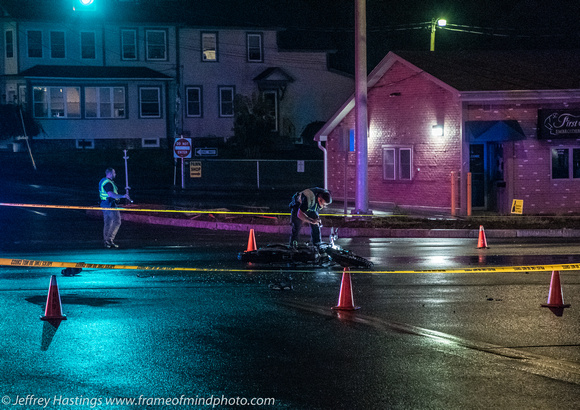 HOOKSETT, NH — Hooksett firefighter and police responded to the intersection of Hooksett Road and Martins Ferry Road on Friday for a report of a motorcycle accident.

When responders arrived, at about 6:50 p.m., they found a Kawasaki motorcycle down in the roadway with an injured man who was reported to be in his 20s. He was taken to the Elliot Hospital with what appeared to be serious injuries. The motorcyclist was reportedly wearing a helmet when the accident occurred.

Hooksett police said a Nissan sedan and a Ford pickup truck were also involved in the crash. The driver of the Nissan was taken to the hospital as a precaution.

Witnesses said the motorcycle was traveling west into the intersection and reported the Nissan sedan was traveling east. It is unknown what direction the Ford pickup truck was traveling.

A blue Nissan was parked in the McDonalds parking lot with damage to the passenger's side of the vehicle and surrounded by crime scene tape.

Traffic was being diverted around the intersection of Hooksett Road and Martins Ferry Road for several hours as the Hooksett Police Department’s Crash Reconstruction Unit investigated. The Hooksett Fire Department and Allenstown Police assisted at the scene.

Hooksett police said the names of those involved were not being released at this time, and the crash remains under investigation

Police ask anyone who witnessed it or has any information, please contact Officer Josh Preve at 603-624-1560 x403.