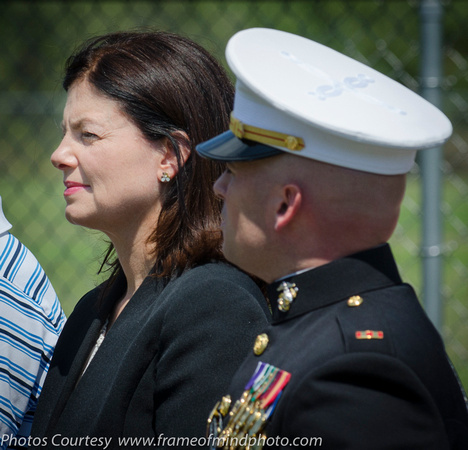 The site for this year’s Battle of Fallujah Reunion was held in Merrimack,NH, which is the home of 1/3 Fallujah Marine Timothy Gibson who passed away on January 26, 2005 along with 29 other Marines and one Sailor.
The CH53-E helicopter carrying him and his brother’s crashed during a sandstorm in Rutbah, Iraq killing all aboard. Gibson was only 23 years old and was a 2000 graduate from Merrimack High School where he was a star quarterback and had played baseball. He enlisted in the US Marine Corps in April 2001.
The death toll that day was the largest for a U.S. aircraft crash in Iraq since U.S. forces first went in in March 2003. Like most of the those lost in the crash, Tim Gibson had been deployed from the Marine Corps base at Kaneohe Bay, Hawaii. His brother’s came in from all across the States remembering and honoring him and participated in a softball tournament that raises scholarships in his name.
The fighting in Fallujah cost US forces 51 killed and 425 seriously wounded, while Iraqi forces lost 8 killed and 43 wounded; insurgent losses were estimated between 1,200 and 1,350.
These proud, dedicated and self-less brothers fought the worse battle in Iraq that resulted in the loss of many of our brave young. Many of those that did make it through have sustained lifelong traumatic stress and physical injuries suffered from roll-overs, improvised explosive devices, RPGs, mortars, rounds of bullets, etc.
They have fought side by side losing their brothers as they fought for Freedom of the Iraqi people and continuing to fight for all of our Freedoms here at home.
Photos By Jeffrey Hastings / www.frameofmindphoto.com
© Jeffrey Hastings / Frame of Mind Photo
User Agreement
Cancel
Continue