Manchester Fire and AMR ambulance responded to a reported building fire at 68 North Adams Street on June 2, 2022, at 5:10 p.m.

Engine 5 which responded from 3 blocks away was there quickly and arrived to heavy smoke coming from a single-family home. Firefighters could hear a dog barking, forced entry, and rescued a golden retriever.

Hose lines were stretched, and immediate searches began for any people that may be in the house. Heavy smoke conditions throughout the building made it difficult for firefighters to locate the fire.

Crews quickly knocked down the fire on the second floor with an aggressive interior attack and brought the fire under control within 30 minutes.

A second pet was located in the stairway and removed from the building by Rescue 1.

No people were home at the time of the fire, and both animals appear to not have any injuries. The Golden Retriever was secured by a neighbor while awaiting the owners to arrive home.

Manchester Fire Battalion Chief Ken Proulx said that one adult and three children were displaced by the fire.

Heavy smoke conditions throughout the building made it difficult for firefighters to locate the fire, and coordinated ventilation assisted in the extinguishment. 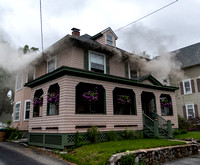 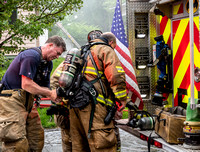 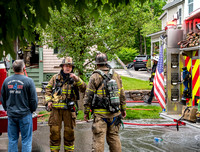 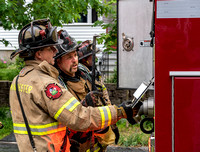