MANCHESTER, NH - Manchester fire and AMR responded to a report of a two vehicle accident at Hamel Drive and Campbell Street Sunday. When fire crews arrived they found one vehicle on top of another.

The driver of the vehicle on top was unable to get out and the vehicle was very unstable. Manchester Deputy Fire Chief Matthew Lamothe called for the MFD building collapse unit and Rescue 1 that have special cribbing, jacks, and stabilization tools.

The driver was conscious, breathing and very alert speaking to firefighters who were stabilizing the vehicle. AMR medics stood by while Manchester Fire worked to safely remove the woman.

After approximately 1 hour the woman was able to be safely removed from the vehicle. The woman had what appeared to be minor and non-life-threatening injuries.

Firefighters remained on the scene as a precaution as Tow trucks removed both vehicles.

Manchester Police are investigating the accident. 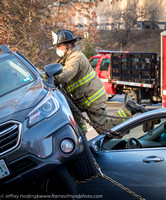