NASHUA, NH — A resident on Timberline Drive at 12:50 am in Nashua heard a woman yelling for help, the yells seemed to come from a under a manhole cover. Nashua fire responded bringing engines, a ladder truck, special hazards truck, and AMR ambulance to the scene.
Nashua firefighters could hear the woman and discovered she was trapped in the culvert under the street. Crews removed the cover and quickly extended a ladder to find an injured woman holding on to her dog who was hanging from the leash in the water below. NFR first removed the large white dog handing the dog off to a waiting paramedic from AMR, and put a firefighter into the culvert to remove the woman.
The woman appeared to be suffering head injuries, and scratches. The woman was put on a stretcher into a waiting AMR ambulance, and taken to the hospital to be evaluated.
NFR Deputy Chief Kerrigan said it was determined the woman was chasing the dog who entered an unsecured pipe behind a house on Timberline Dr and the woman chased the dog into the pipe and became trapped approx 150 feet from the where she entered and trapped under the street.
A person familiar with the dog came to the scene and removed the dog and left the scene. It is unknown if the dog was injured but was active at the scene.
Jeffrey Hastings www.frameofmindphoto.com/news 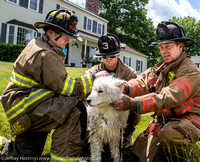 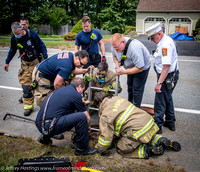 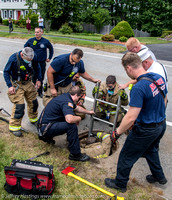 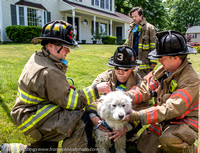