MFD Respond To Fire In The Building On Bridge Street
Manchester, NH - Manchester received a call for a fire in the building at 398 Bridge Street on April 14, 2021. Fire crews responding were advised there were contractors working on the multi-family house when something appeared to be smoking and on fire.

MFD crews arrived and found smoke showing from the second floor, and smoke venting out of skylights on the roof. Crews stretched hose lines while Truck 1 and Truck 7 navigated several utility lines to gain access to the building if needed. Crews checked that everyone had evacuated, and set up ground ladders to be ready if needed.

The incident was brought under control quickly, and units cleared smoke from the building while they remained on the scene.

No civilians or firefighters were injured. Manchester Fire investigated the incident and it appears to be accidental and appears to be an electrical issue. 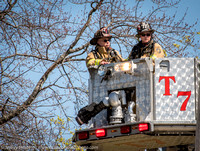 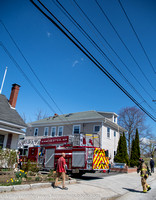