On Friday, October 18, 2013 at 1120 PM the Manchester Police Department responded to a single vehicle crash with personal injury on Bridge St. Extension near Stevens Pond Park.


The preliminary investigation indicates the vehicle, 2012 Dodge Charger, was traveling easterly on Bridge St. when it left the roadway striking several objects before rolling over. The driver , was identified as:


was pinned in the vehicle and received serious injuries. The passenger, identified as:


sustained serious but non-life threatening injuries. Both Pasitcznk and Hunter were transported by ambulance to the Elliot Hospital.


Both speed and alcohol were contributing factors in this crash. Pasitcznyk was charged with Operating Under the Influence of Liquor and will appear in court at a later date. The investigation into this crash remains open and additional charges may be forthcoming. 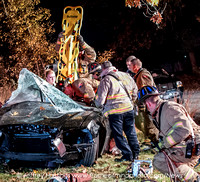