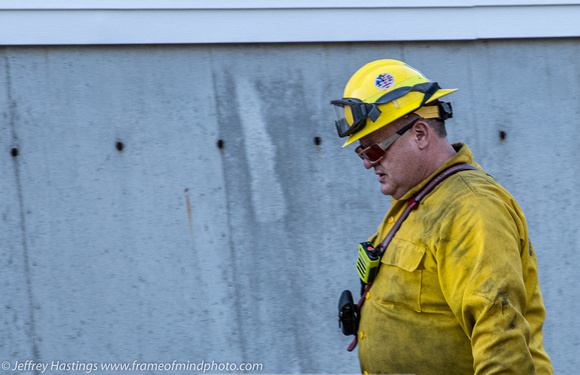 MERRIMACK, NH - Merrimack Fire Rescue responded to a fire behind a house on Amherst Road Thursday afternoon. On their arrival they had an area which was quickly spreading due to a brisk wind, and very low humidity.

MFR called for mutual aid towns to respond to the scene and to their stations for station coverage. Amherst and Nashua Fire responded to the scene on Amherst Rd between Turkey Hill and Bryce. The section of road had to be shut down to traffic so hoses could be run from hydrants in the area.

According to Captain John Manuele the Merrimack Fire Marshal the fire was started when a homeowner was burning in the backyard without a permit, and no hose line had been stretched to the area. When the fire began to spread 911 was called and Merrimack Fire responded.

The small area which was originally being burned by the homeowner spread to over an acre of wooded area.

Capt Manuele stressed that fire permits must be obtained before homeowners can burn. If a permit is issued the homeowner is given a list of safety precautions which must be taken.

It was fortunate the fire did not spread to any nearby houses and was contained to the wooded area by firefighters.