MFD MAKES INCREDIBLE EFFORT TO FIND MAN IN RIVER
MFD received calls from a frantic woman at the Piscataqua river that her boyfriend had gone in the water, went under and didn't come back to the surface.
MFD launched two rescue boats, and Marine Patrol who was in the area also launched a boat. Fire Fighters searched from the boat as well as one Fire Fighter dove in the water.
After approx 45 - 60 Minutes MFD located the 21 year old male and pulled him from the water in the boat and began CPR. The boat transported him to the boat launch where AMR was waiting and continued to perform CPR and transported to CMC.
In addition to the man in the water the female who is 21 is 8 months pregnant and due to the stress she was having contractions and had to be transported from the scene to the Elliot before they found the male.
The outcome of the male is unknown at this time but did not look favorable based on the time under water.
The beach area is a popular swimming spot which is accessed from the end of Electric St in Manchester. The river has one bank in Manchester and the other in Goffstown. Goffstown PD and GFD patrolled the west side of the river banks 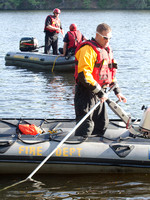