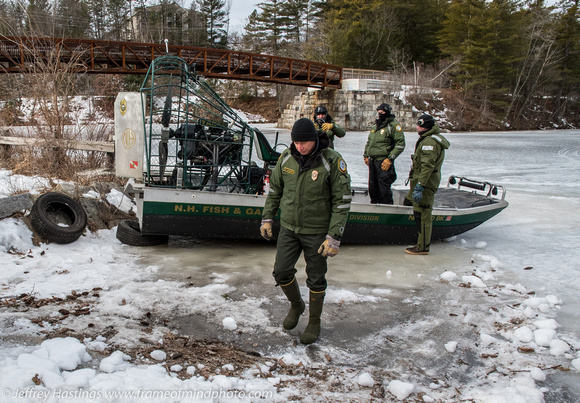 GOFFSTOWN, NH — Goffstown police received a call Thursday from a person indicating a man who had not returned from riding his 4-wheel ATV.

The person was last seen riding at around 4 p.m. and by 9 p.m., had not returned. NH Fish and Game Lt. Cheney said that Goffstown fire, police, and Fish and Game searched throughout Thursday. The Goffstown Fire Department used spotlights and was able to spot a helmet on the ice of the Piscataquog River. The helmet was located near broken ice and exposed water.

Search crews were able to see the rim of an ATV in the water. Due to the instability of the ice the NH Fish and Game Dive Team was requested to the scene as well as an airboat. At 10:45 Friday morning, the divers were able to remove the victim from the water.

The NH Medical Examiners office is on the scene and a local funeral home will be transporting the victim from the scene.

Cheney said that even though temperatures have been cold the ice is unstable due to the active water in the river. He did not identify the man by name at this time.

Relatives of the man were on the scene as the victim was located and removed from the water.