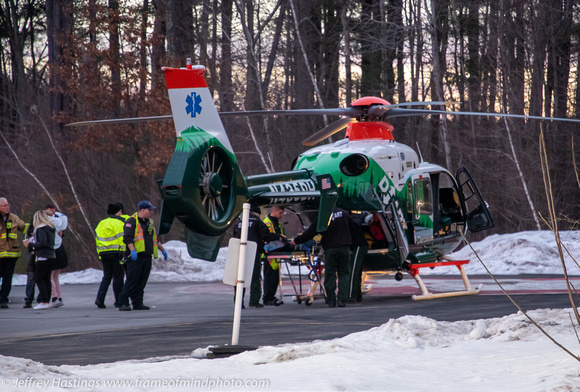 Car Crashes Into Applebees In Derry - Victim Flown To Boston

A car crashed into the Applebees restaurant on Manchester Rd in Derry, NH shortly after 6 am. Derry Police arrived on the scene and reported entrapment. Derry Engine 3, Medic 1, Car 1 and because it was a car into a building Derry Engine 1, Derry Rescue 1, Heavy Rescue Trailer and Lumber trailer were dispatched.

The driver who was the only occupant was entrapped in the vehicle.
Derry Fire used jaws of life to extricate the man. Based on the severity of injuries DHART was requested to provide transport to a Boston Hospital.

The victim was brought to DHART at a landing zone set up at Parkland Medical Center in Derry. The victim was transferred from the Derry Ambulance and was flown to Beth Israel Hospital in Boston with life-threatening injuries.

Applebee’s suffered moderate damage to a non-load bearing section of the seating area, the car did not breach the structure. Applebee’s will be able to use the unaffected seating areas and can reopen as scheduled.

The accident is under investigation by Derry Police.