NASHUA, NH — On June 9, 2021 Nashua Fire Rescue, police, and AMR ambulance responded to 53 Concord St. for a reported structure fire.
Upon arrival, crews had smoke showing from the attic and roof of the two-story house. Firefighters were advised there were people potentially still in the building and a second alarm was called for additional resources.

Fire crews stretched hose lines so they could make entry to search the multi-unit residence. Ladder trucks were set up and had to navigate live power lines and trees to reach the house.

Crews battled heavy fire on the top floor and attic in extreme heat. A 3rd alarm was requested for additional manpower, and multiple towns and cities responded with mutual aid.

The search of the building was completed and no one found inside of the building. Firefighters worked in intense heat and crews were rotated so they could rehydrate and use a cooling station set up at the scene.

After more than an hour, the fire was brought under control with heavy damage to the structure. Nashua fire confirmed there were three units at the address — with one apartment on the first and second floors. An additional unit is located in the barn that did not appear to be damaged.

Residents of the home watched from under a tree as crews worked to battle the fire and some holding pets that they had rescued from the fire.

NFR Chief Brian Rhodes confirmed no firefighters or residents were injured. Several firefighters were medically evaluated at the scene due to heat exposure. Nashua Fire says the fire does not appear to be suspicious and remains under investigation. Nashua Building Department is assisting the Nashua Fire Marshal's Office with their investigation.

The American Red Cross is at the scene assisting the residents displaced by the fire.

Concord Street was closed for several hours but is now open to southbound traffic. 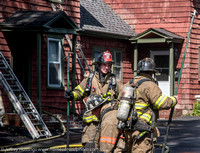 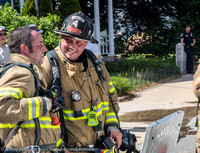 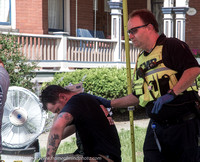