On Wednesday, February 26, 2020, at approximately 2:00pm the Hooksett Police were called to the area of 1134 Hooksett Road for the report of a motor vehicle accident involving one vehicle and a pedestrian. When they arrived they performed CPR on the female victim, later identified as Prairie Champagne, 43 years old of Hooksett, NH.

Champagne was transported to the hospital where she passed away due to injuries sustained in the accident.

The driver of the vehicle was identified as Adam Finley Taylor, 44 years old of Alton, NH.

It was discovered that Finley Taylor’s driver’s license was suspended and he was arrested at the scene and charged with Driving after revocation or suspension. He was later released on PR Bail for that charge.

The Hooksett Police are actively investigating this incident and will determine if additional charges will be filed against Finley Taylor.

The family of Prairie Champagne is respectfully asking for privacy during this very difficult time. 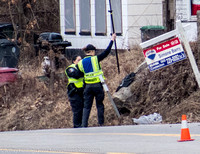