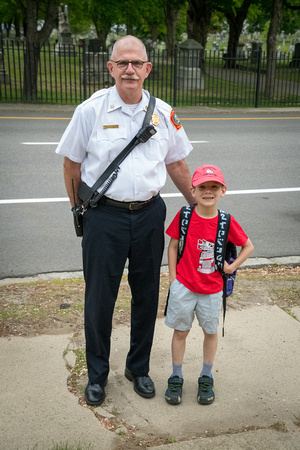 NASHUA, NH - A Nashua 7-year-old boy rode to school in style, including lights flashing and sirens sounding letting everyone know he was arriving.

Rian's special ride to school was part of a reading contest sponsored by Nashua police, fire, and the Public Library’s “Let's Go Places”.

Rian read for 685 minutes during the six weeks the program ran in Spring 2020 when he was in kindergarten. One of Rian’s prizes was for a ride in a fire truck to school, but the pandemic delayed that ride.

Friday Chief Brian Rhodes of Nashua Fire Rescue pulled up in front of Rian’s house and his enthusiasm was evident when he saw the Chief. Soon after a Nashua fire ladder truck, and Special Hazards unit followed by Assistant Chief Steve Buxton pulled up to pick up Rian.

Rian’s enthusiasm continued to increase as the firefighters greeted him, and prepared him for the ride. Rian took no time to go jump in the front seat, and he got buckled in for a ride he wouldn’t forget.

Nashua firefighters took a longer than the normal route to the Fairground Elementary school so Rian would have a little extra time in the parade of trucks.

Rian who is now a first-grader was patient in collecting his prize, for a reading program. It was well worth the wait, as he pulled in his grandparents were waiting, as well as the staff from the school. He jumped down from the truck and said “that was an awesome ride”

Christine McDonald, Rian’s mother said it was a perfect combination he loves to read, and loves fire trucks. McDonald said he was enthused to read no matter what the reward was, but this was a special treat for him.

Rian took time to pose for photos with the firefighters, and school staff. As soon as the photos were done he was ready to head into school to begin the day. Chief Rhodes and Asst. Chief Buxton walked him towards the door where he ran into school anxious to tell his story.