MANCHESTER, NH - Manchester Fire Engine 5 based on Webster Street was returning from a call to their station on May 5, 2021. They noticed black smoke billowing just two blocks from the station and went in that direction.

As they turned the corner onto River Road at about 7:00 p.m. they saw smoke coming from the rear of a 24-Unit apartment building located at 95 River Road. Dispatch was sending multiple engines to the call as they pulled up to the fire.

The building occupied by many people was filling with heavy smoke as an apartment on the first floor was burning. People began evacuating and initially firefighters were advised of people potentially trapped in an apartment.

Hose lines were stretched, and the fire in the bottom floor apartment in the rear of the building was quickly knocked down. Firefighters continued to search to assure everyone got out safely. A firefighter assigned to Rescue 1 found a cat in the building and brought the cat safely to the owner.

The American Red Cross has been called to the scene to assist residents who may be displaced.

Manchester Fire responded to another fire earlier today in a 40-unit building at 625 Chestnut Street.

The fire is under investigation by the MFD Fire Marshals Office. 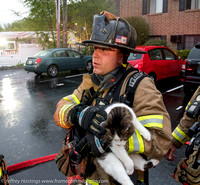