NASHUA, NH — Nashua Fire Rescue was dispatched to 6 Bramble Drive after a passerby spotted smoke coming from the house on Tuesday.
Firefighters arrived around 7:20 a.m. and reported smoke coming from a single-family home. Firefighters immediately made entry into the residence to search for occupants and locate the fire.
Firefighters reported over the radio that the fire appeared to be in the basement and was spreading to the first floor. Crews stretched hose lines to the house and secured water supplies at hydrants.
The firefighters were able to knock the fire down quickly in the basement and confirmed no occupants were in the building.
Crews set up smoke ejection fans and cleared the house of smoke. AMR Ambulance personnel stood by for any medical assistance that may be needed.
The fire is under investigation by the Nashua Fire Marshals Office and no one was injured in the fire.
©Jeffrey Hastings www.frameofmindphoto.com/news 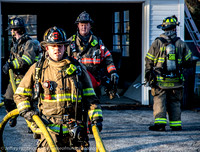