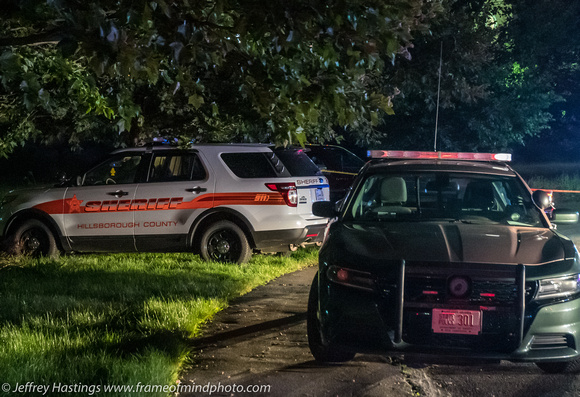 The New Hampshire Attorney General's Office said Bedford police received multiple 911 calls around 7 p.m. at the hotel about an incident. There, police found two men dead — one in the lobby of the hotel and a second man in a room.

Theodore Luckey, 42, of Asbury Park, New Jersey, was arrested on second-degree murder charges on Saturday. Luckey was also charged with three counts of being a felon in possession of a deadly weapon.

Guests of the hotel who were evacuated Saturday night arrived back on Sunday morning where officers worked with them to retrieve their belongings from rooms. Guests were assisted, one by one, with police asking for identification and, according to one guest, they had to sign a “consent to search document.”

Crystal and Jonathan of the Bronx borough of New York said they came to New Hampshire to visit, where they were expecting peace and quiet. As they learned about the description of the suspect arrested, they realized they had seen the subject just before they went out to get food. When they returned to the hotel, everything was closed off with crime scene tape and were told of the two deaths, they said.

Several guests waiting to be processed said they missed flights and were anxious to gather their belongings so they could leave.

A man, who witnessed what he had described as a “machete attack,” also returned to the hotel on Sunday. He told Patch he was in town for work and Country Inn & Suites made arrangements for him to move to a different hotel.

The man, who asked not to be identified, was still visibly shaken from what he saw. He described “blood everywhere” including in the hallway and behind the front desk of the hotel where one of the men was killed. He had spo
©Jeffrey Hastings
User Agreement
Cancel
Continue