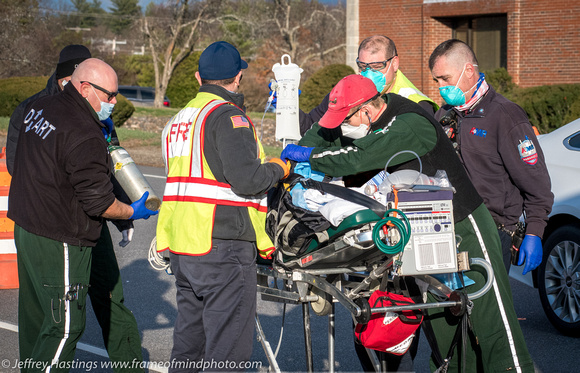 NASHUA, NH — Nashua Fire and AMR ambulance were dispatched to Charron Avenue for a woman who was struck by a vehicle Saturday.

Nashua Fire activated the trauma team at Southern NH Medical for a seriously injured woman in her 70s at around 1:30 p.m. A short time later, DHART medical helicopter was requested to the scene.

Nashua police detoured traffic around the accident. Nashua firefighters coordinated with DHART and a decision was made to land the helicopter at the scene.

After an extended time on the ground, DHART put the patient in the helicopter and flew her to the Lahey Clinic in Massachusetts. The woman appears to have suffered serious and life threatening injuries.

Several workers from a local hair salon across the street initially offered assistance to the woman as well as the driver of the car — who was visibly shaken up.