On arrival at about 12:15 a.m. the first engine they had heavy fire shooting out of the second floor and spreading quickly. A second alarm was requested bringing multiple towns and cities mutual aid, and an AMR ambulance.

Crews worked to fight the fire in the initial building and protect the adjacent building where the siding was melting due to the extensive heat. Firefighters made entry into the building and began searching for any occupants, and a third alarm was requested for additional resources.

Firefighters were challenged with a large number of power lines and the close proximity of several buildings. The small street was filled with fire apparatus,

After about one hour the fire was brought under control and crews worked to chase lingering hot spots. Eversource and Liberty Utilities were requested to the scene to shut off service to the building. One power line was down in the road, and Eversource removed it to protect the firefighters.

The building which is a multi-unit building has very large units that were occupied by several people. The initial estimate is 30 to 40 people. The Office of Emergency Management will work with the residents and the American Red Cross to coordinate housing.

Christmas decorations hung from the fence in front of the house reminding everyone that it is less than one week until Christmas. Residents shared that many of them have lost almost everything they owned in the fire.

The fire is under investigation by the Nashua Fire Marshals Office. At the time of this post it did not appear that any residents or firefig 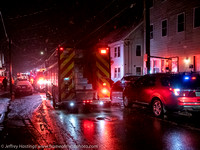 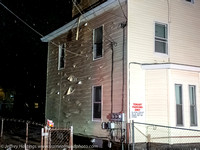 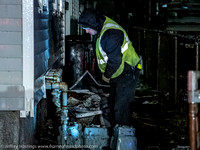 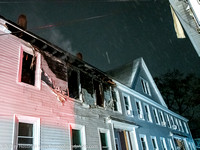 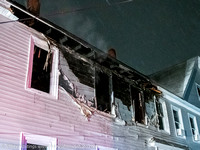 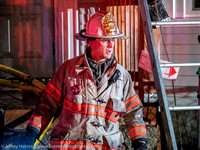 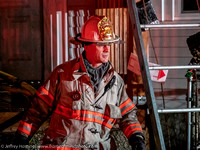