MERRIMACK, NH - On January 22, 2021 A vehicle traveling south on the Everett Turnpike lost control and crashed through a guardrail on Friday, NH State Police said. The accident occurred in the rush-hour morning commute around 7:45 am.
NH State Police and Merrimack firefighters responded to the scene. When they arrived they found the car on fire and the driver of the car had been moved away from the vehicle by people who witnessed the accident.
Merrimack Fire Rescue treated the patient and requested a trauma alert at the hospital before transporting the victim to the Elliott Hospital.
State police say the driver of the Volkswagon that struck the guardrail was Donald Quiet, 33, of Manchester. After being transported to the hospital police say he only had minor non-life-threatening injuries.
A second vehicle that was traveling north struck debris activating their air-bag and damaging the car. The driver was uninjured and the car was towed from the scene.
The northbound side of the F.E. Everett Turnpike was closed for 30 minutes while the guard rail and accident was cleared.
State Police said the crash is under investigation. Anyone who witnessed it is asked to call NH State Police Trooper E. Torrens at [email protected]
©Jeffrey Hastings www.frameofmindphoto.com/news 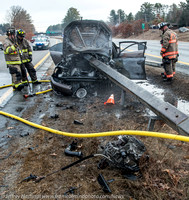