Milford, NH - Milford Fire, EMS and Police responded to an accident at Route 101 and Nashua Rd. On arrival they had a septic truck which was hit by a passenger car, the rear valve of the truck was broken off. The broken valve allowed raw sewage to flow out of the 3,500 gallon tank onto the road.

While Milford Fire and Police were working the accident firefighters noticed smoke coming from the hood of the Milford Fire Utility 1 vehicle. Firefighters quickly began removing gear from the truck while other firefighters grabbed fire extinguishers. The fire spread quickly and the Milford Engine was relocated so that it could provide water to the fire.

The fire was extinguished and the truck was removed from the scene by a tow truck.

No one was hurt in the fire. 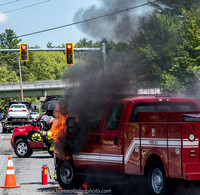 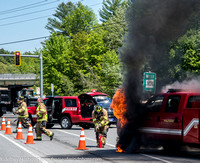