On 1/3/20 MFD Dispatch received a call indicating that the alarms were sounding and that smoke was filling the building at 24 Dyson St. Crews arrived as the residents were self-evacuating the building, fire crews had to instruct several residents to evacuate.
Crews discovered a fire in the basement. A hose line was advanced into the basement to extinguish the fire while additional crews searched for additional occupants or pets. Additional arriving crews ventilated the residence.
Due to the rapid notification of the fire department and the quick and efficient response crews were able to extinguish the fire before it consumed the living areas of the building. Because of this response no residents were displaced for more than several hours.
The fire was caused by improper smoking materials on a squatter’s mattress in the basement that was being used as an illegal sleeping area. Along with the illegal sleeping area, both front and rear stairwells were full of storage making both ingress and egress difficult.
The landlord will be working to get the egress paths clear and secure the basement area. The fire is being classified as accidental in nature. The smoke alarms in the building were operating, making the occupants aware of the smoke condition in the structure.
©Jeffrey Hastings www.frameofmindphoto.com/news 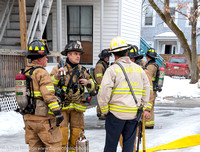 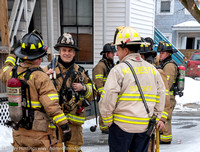 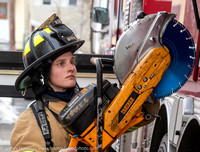 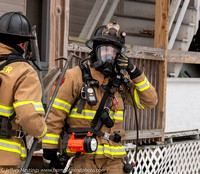 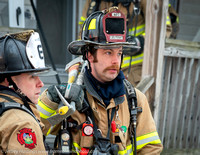