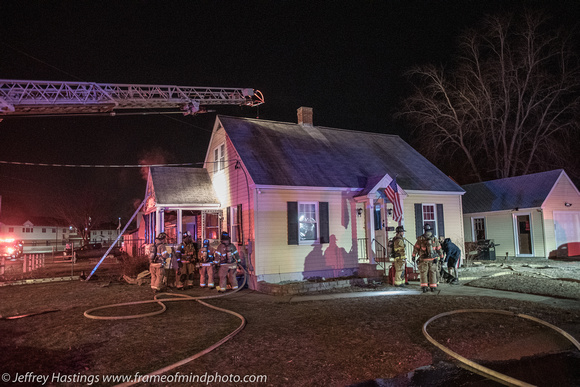 NASHUA, NH - Nashua Fire Rescue and AMR responded to a reported house fire at 18 Lewis Street March 15, 2021. The caller reported the porch of the house was on fire, and there were occupants in the house.

When the first fire crews arrived they had fire coming out of the windows of an enclosed 3-season type porch. A neighbor had notified the occupants and they were able to safely get out of the residence without injury.

Firefighters extended a ladder truck to the roof while other firefighters quickly knocked down the porch fire. Firefighters used thermal cameras to check for areas where the fire extended into the walls of the house. The fire was brought under control within 15 minutes.

AMR medics evaluated the occupants who did not require medical transport.

The Nashua Fire Marshals Office is investigating the fire.