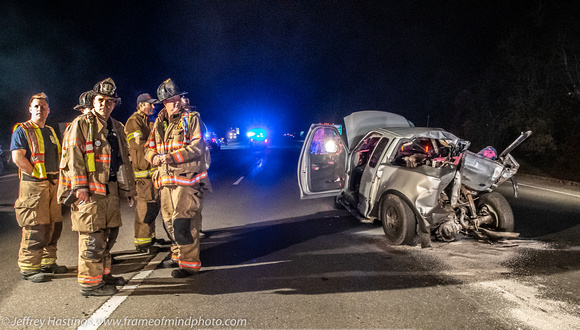 On Tuesday, October 22, 2019, at approximately 12:40 A.M., Troopers of the New Hampshire State Police Troop-B barracks in Bedford, NH, responded to a report of a motor vehicle crash on the Northbound side of the F.E. Everett Turnpike in Nashua, at approximate mile marker 5.6.
Upon arrival, Troopers found that a 2018 Dodge Ram 2500 pickup, operated by Michael DUCLOS, age 48 of Litchfield, NH had rear-ended a 2002 Ford F-150 pickup, operated by Carlo ADAMES, age 43 of Lawrence, MA.

Due to extensive damage sustained, both vehicles were disabled in the roadway and blocked northbound traffic. ADAMES suffered serious injuries as a result of this collision and was ultimately transported to the Elliott Hospital in Manchester for treatment of those injuries. DUCLOS was also transported to St. Joseph Hospital in Nashua for minor non-life threatening injuries.

Based upon the preliminary investigation, driver fatigue appears to be a factor in this collision; however, all aspects remain under investigation.
A portion of the Turnpike in the vicinity of Exit 5 was closed for approximately 1.5 hours for the investigation of this incident.
The New Hampshire State Police Troop-B were assisted on scene by members of the Nashua Police Department, Nashua Fire Department, and the New Hampshire Department of Transportation.
©Jeffrey Hastings
User Agreement
Cancel
Continue