MANCHESTER, NH - Manchester Fire responded to a reported fire in the building at 625 Chestnut Street on May 5, 2021. While en route they were advised that there was a fire in an apartment on the second floor of the 40-unit brick building.

Firefighters arrived at about 11:45 a.m. and people were evacuating from the building and smoke was coming from the apartment on the second floor.
Water supply was set up and hoses run to the apartment where the fire originated, and the bulk of the fire was quickly knocked down.

Firefighters assisted several residents to evacuate safely from the building. AMR ambulance medics brought an elderly male to a waiting ambulance after it is reported he was having issues breathing.

The building is equipped with smoke detectors and fire alarms that were sounding when firefighters arrived. Due to the age of the building, there are sprinklers in the building.

Fire investigators interviewed the occupant of the apartment where the fire started. The woman was home at the time of the fire and was able to safely evacuate.

The elderly man brought to the ambulance was eventually able to return to the building and refused medical transport from the scene.

District Chief Jonathan Starr said the building was partially occupied at the time of the fire and there are about 40-units. The fire was brought under control with the manpower and apparatus dispatched on the first alarm.

No firefighters or civilians had injuries that required medical transport.

All firefighters have now cleared the scene and the building has been turned over to the owner of the building. 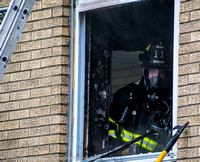 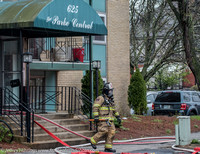 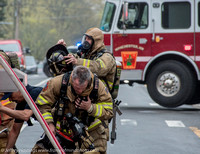 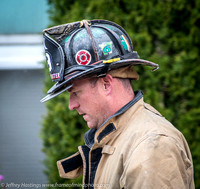