NASHUA, NH - On June 22, 2021 Nashua Fire Rescue responded to 5 Fremont Street Tuesday for a building fire.
When Engine 5 arrived they reported smoke showing from a 1 1/2 story wood frame single family house just before 5:00 p.m.
A working fire status was requested bringing an additional engine and ladder to the scene of the fire.
Firefighters stretched hose lines and began to search the residence and extinguish the fire. No people were located, however, firefighters quickly found two dogs in the house. One Lab was unresponsive, and a pug. Both dogs were removed from the house by Nashua firefighters.
AMR ambulance personnel on the scene immediately started providing oxygen to the two dogs using specially designed masks for animals.
Chris Stawasz, Director of AMR said both dogs were responsive after receiving oxygen. A second ambulance that had been requested to the scene transported the dogs to All Pet Veterinarian Care.
Stawasz said Nashua firefighters did a fantastic job getting them out of the burning building quickly and it was a true team effort. "Raven" the black lab, and "Sir Pugsley" were both responsive and active at the veterinarian. The owners of the dog were extremely happy with the efforts of Nashua firefighters and AMR medics.
NFR Deputy Chief Glenn MacDonald said the house is uninhabitable due to the damage from the fire. The fire was isolated by firefighters primarily to the kitchen area. Two adults and one child were displaced from the house.
The cause of the fire is under investigation by the City of Nashua Fire Marshal’s Office.
©Jeffrey Hastings www.frameofmindphoto.com/news 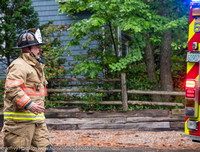