HOLLIS, NH — On Wednesday, May 27, 2020 at approximately 7:50 am Hollis police, firefighters, and EMS responded to Depot Road near Rideout Road for a pedestrian struck by a motor vehicle.
Hollis Police Captain Brendan LaFlamme said the preliminary investigations is that a white Nissan Rogue driven by a 62-year-old woman who is a Hollis resident was traveling South on Depot Rd. A pedestrian also traveling South on Depot Road suddenly veered into the path of the vehicle and was struck. The collision was witnesses by a third party who was able to provide information to the investigators.
The pedestrian who was identified as 20-year-old Madison Kuchta was transported to Southern NH Medical Center with what appear to be non life-threatening injuries. According to radio transmissions the pedestrian was thrown 30 feet from the point of the collision.
Captain LaFlamme said at this time it does not appeared that impaired driving, speed, or distracted driving are suspected in the collision. It appears the pedestrian may have inadvertently changed direction when distracted by an electronic wrist watch she was wearing.
Hollis Police ask that anyone who may have witnesses the collision should contact Hollis Police Officer Adam Kushmerek at 603.465-7637
©Jeffrey Hastings www.frameofmindphoto.com/news 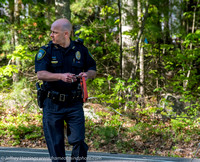