PEPPERELL, MA - Pepperell kicked off their 30th Anniversary Fourth of July town celebration on Saturday with a parade through town. The organizers refer to it as “Small Town, Big Bang Independence Celebration”

The crowds began to grow, and line the streets well before the start of the 10:00 a.m. parade. Hundreds of people wore their patriotic colors, vendors sold items to those waiting for the parade.

Sirens blared towards the end of the parade as fire apparatus from several towns and cities from Massachusetts and New Hampshire lined the streets.

Parade participants threw candy to the kids lining the streets, and even a local dairy company handing out chocolate milk.

The parade is one of the earliest in the area to kick off the celebration of Independence day. 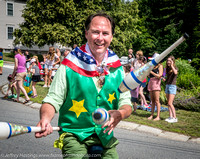