Divers And Tow Company Recover Vehicle From River
Black Dog Divers and John’s Wrecker Service were on the scene in Manchester at the Piscataquog River Thursday, May 9th removing a 2012 Ford Fusion which went into the water on May 2nd.
At the time of the vehicle going into the river Car owner Mike Rourk said that he left his keys in the car in the parking lot of the Electric Street boat ramp near Bremer Street on May 2, went for a walk and saw his car in the river when he returned. “Obviously, someone drove it in the river,” he said in an interview last week.
NH Department of Environmental Services contracted the two companies to remove the vehicle after the incident.
At the original call MFD, AMR, MPD, and Nashua Fire Rescue Dive team responded to the incident. The dive team verified there was no one in the vehicle. The original tow company dispatched the day of the incident did not have the equipment to do the recovery. NHDES determined they would take over the operation.
The owner at the time of the incident said there was no insurance on the car, and that he had a lien on the vehicle with payments left to be made.
When the vehicle was removed from the water it appeared it was filled with personal belongings in the rear seats of the car and trunk.
©Jeffrey Hastings www.frameofmindphoto.com/news 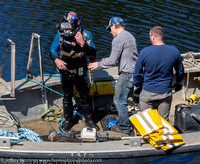 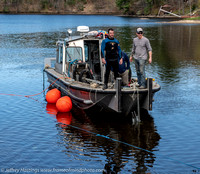