Thursday at 10:15 am Salem Police, Fire and EMS responded to North Broadway for a reported 3 vehicle accident. On arrival they found a dump truck had rear-ended a Nissan pick-up which was then pushed into a school bus.

RGA Towing removed the pick-up truck from the scene 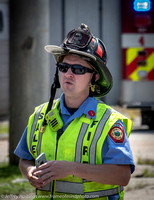